This €2 million, EU-funded project is the third multi-million Infrastructure Malta investment in new facilities for alternative modes of travel this year, following the completion of a segregated cycling route between Luqa, Hal Farrug and Qormi in March and the opening of another pedestrian and cycling bridge in L-Avjazzjoni Avenue, connecting Luqa and Gudja, a few weeks ago. 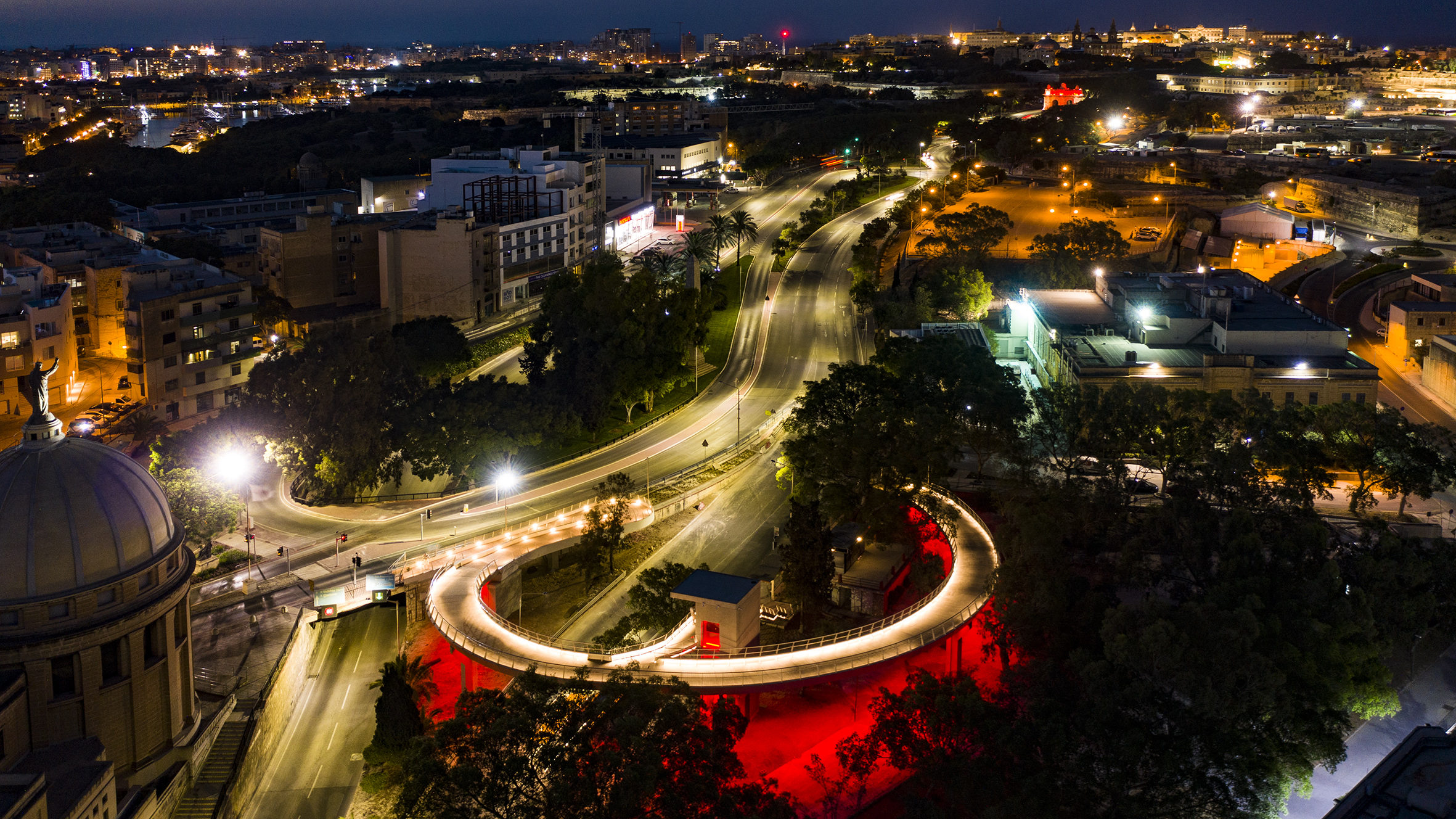 The new circular girder bridge at Blata l-Bajda rises over San Gorg Preca Road, next to the MUSEUM Society headquarters, to connect Hamrun’s Il-Kbira San Guzepp (St Joseph High) Road with the Spencer Hill and the Menqa areas of Marsa, including the nearby ferry terminals of the Grand Harbour, and the Floriana Park and Ride facilities. It provides a safer and quicker arterial road crossing for pedestrians and cyclists, eliminating the accident risks of the existing pelican crossing.

The overpass also ensures quicker, safer links between the five bus stops (Blata l-Bajda 1, 2, 3, 4 and 5) at both side of these busy arterial roads. It improves the commutes of many passengers who use this area to change buses on their way to and from the south of Malta.

The structure incorporates gently sloping ramps, taking cyclists and pedestrians from Il-Kbira San Guzepp Road, Hamrun, over the southbound carriageway of San Gorg Preca Road towards the other side of the road at Marsa. It also includes passenger lifts and stairs, to ensure it is accessible and comfortable to everyone. 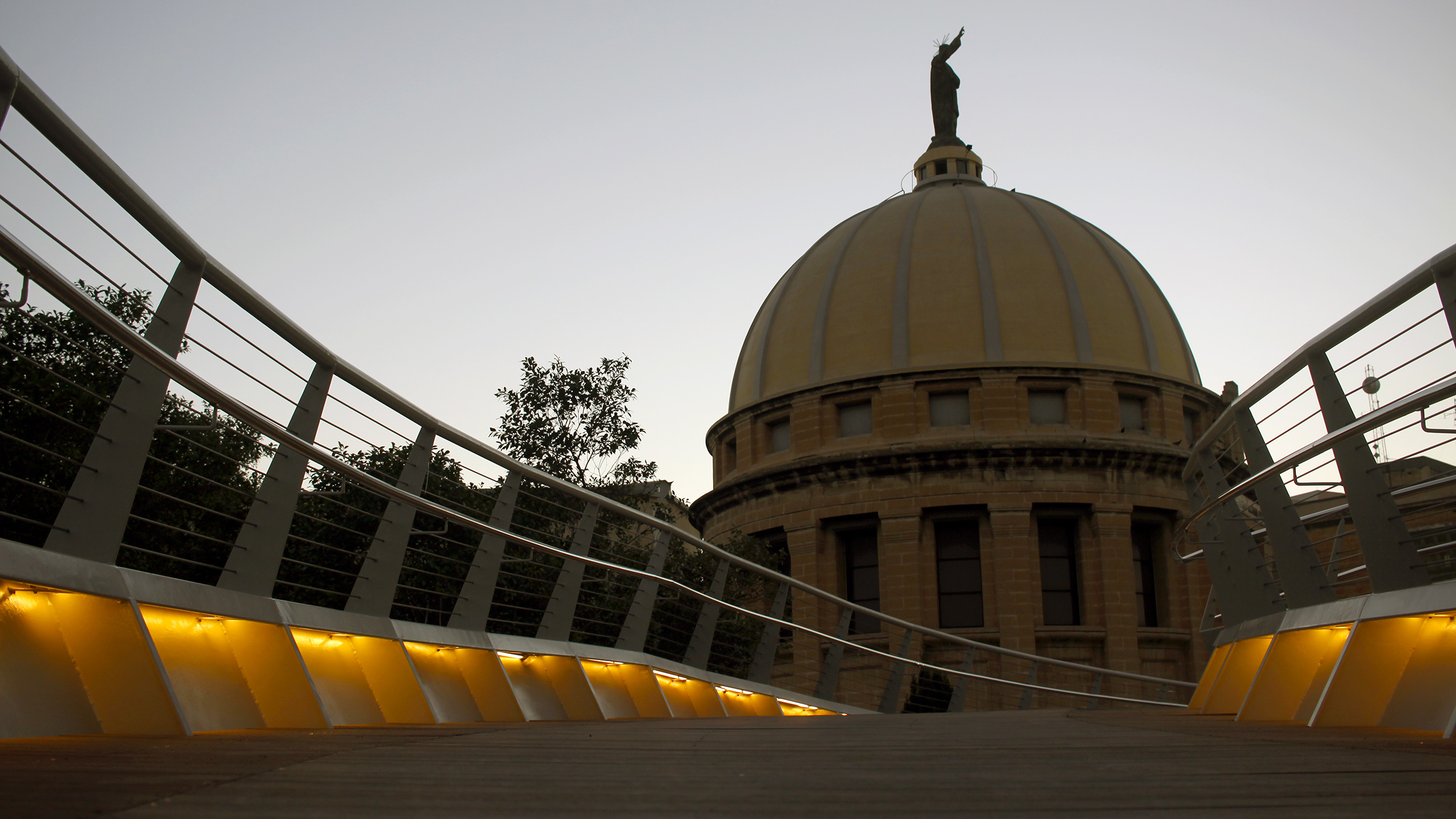 The agency’s architects designed the geometry of the bridge deck to smoothly link both sides of the road with minimal adverse impacts on the tall trees in adjacent landscaped areas, as well as the surrounding urban landscape. As the bridge rises and turns, commuters crossing it can enjoy the unusual experience of walking or cycling amidst the high canopies of the adjacent trees.

Infrastructure Malta’s contractors started fabricating the 72-tonne steel deck of this bridge during the second half of 2019, in a workshop in Marsa. Meanwhile, at the project site they drilled 21 cores several storeys deep into the ground to cast the concrete piles serving as foundations for the bridge structures. These elements, including abutments, pillars, approach ramps, stairways and elevator shafts were built earlier this year.

In February, the contractors transported the five steel deck sections, each weighing over 16 tonnes, to the project site, where they lifted and secured them in place atop the concrete pillars and abutments. Once in place, workers started laying the bridge’s decking, using a long-lasting, weatherproof material made of 100% recycled, and recyclable, plastic and wood. They completed the lift installations, lighting, handrails, video surveillance cameras, landscaping and other final works during the last few weeks.

The Blata l-Bajda pedestrian and cycling overpass is part-financed by the European Regional Development Fund of the European Union. 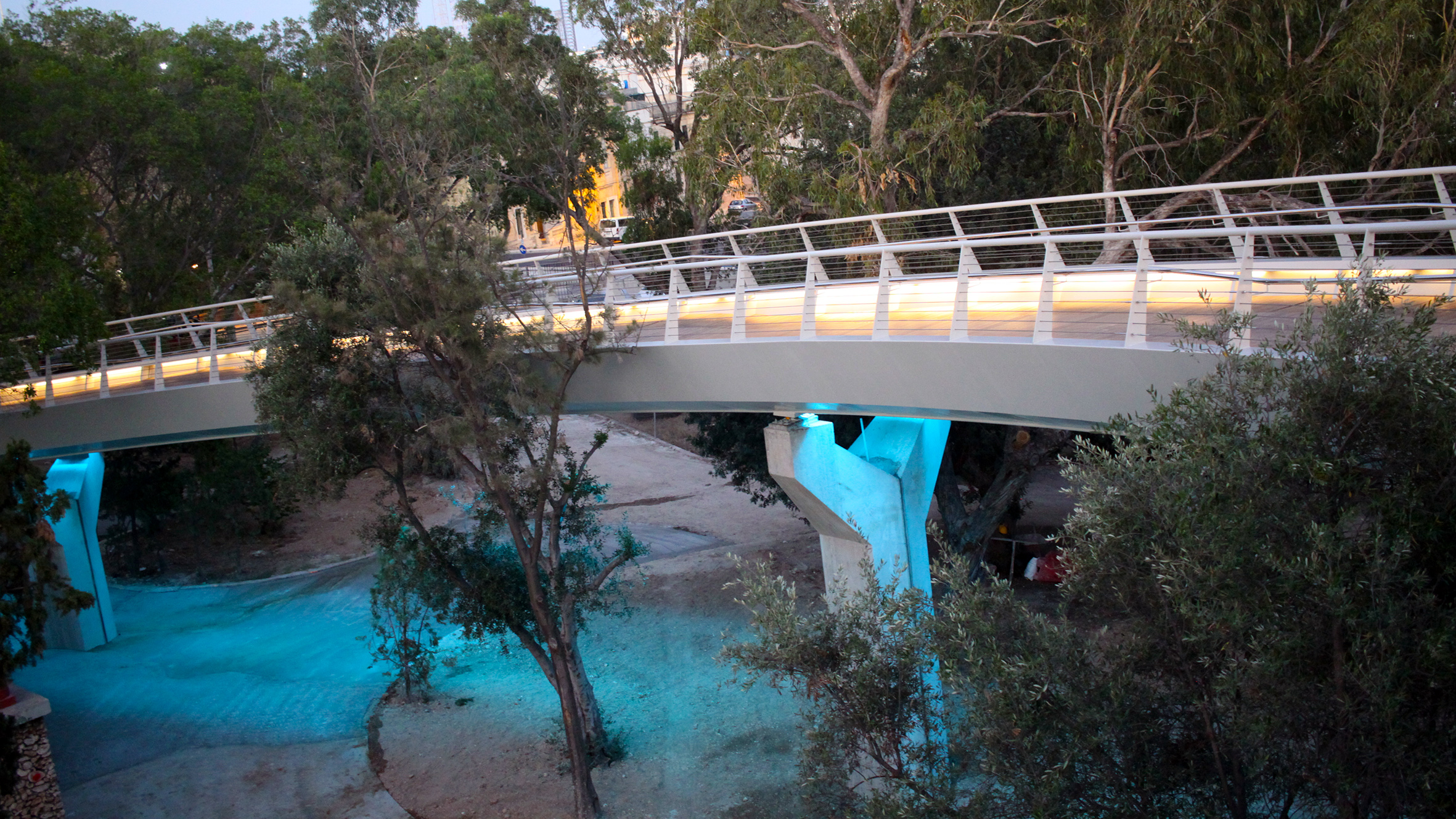 Earlier this year Infrastructure Malta announced plans to develop a new subway with improved facilities to replace the old pedestrian underpass connecting four of the most important bus stops of Malta’s public transport network at the Portes des Bombes area of Floriana, a short distance away from the new Blata l-Bajda bridge.

Infrastructure Malta is currently also working on another footbridge in Dom Mintoff Road, to create a safer pedestrian and cycling route between the Malta College of Arts, Science and Technology (MCAST)’s main campus, the residential and industrial zones of Corradino and the centre of Paola.

Other new facilities encouraging walking and cycling are currently under construction as part of other ongoing Infrastructure Malta road projects, including the Central Link Project at Mriehel, Birkirkara, Balzan and Attard, the Santa Lucija Roundabout Underpass Project and the Marsa Junction Project, between Paola and Marsa.