The new structures of this €70 million EU-funded investment were inaugurated by Dr Joseph Muscat, Prime Minister of Malta, in the presence of Dr Ian Borg, Minister for Transport, Infrastructure and Capital Projects, the Infrastructure Malta team led by Perit Raymond Farrugia and Ing. Fredrick Azzopardi, the agency’s Chairman and CEO, and several project stakeholders. 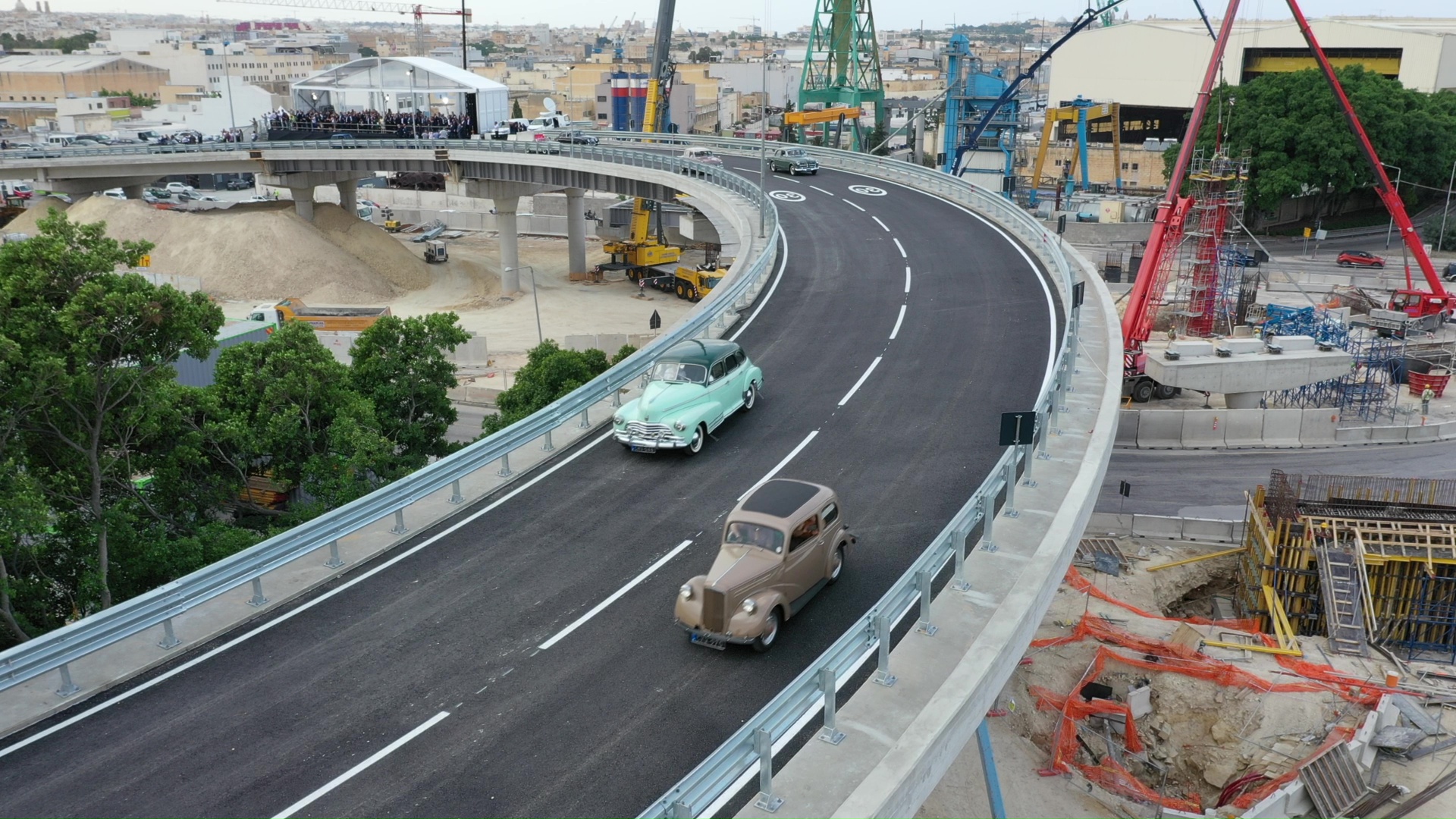 The second flyover structure is the tallest one, rising over four storeys above ground to surpass a lower flyover beneath it. Its 13 steel curved beams were fabricated in Turkey, shipped to Marsa and assembled on site this summer. Some of them are longer than 100 metres.

The two new structures rest on 16 concrete, steel-reinforced columns built on foundations comprising 137 concrete piles, reaching depths of up to seven metres underground. Workers used over 800 tonnes of steel, 7,500 tonnes of concrete and 1,400 tonnes of asphalt to complete this new connection.

The concrete and asphalt required for this project are being produced in two of three temporary plants erected at the former Malta Shipbuilding area, across the road from the project site. These plants are producing the 350 beams required for the flyovers, as well as the concrete for all project structures and the asphalt for the new road surfaces. Without them, these materials would have to be transported to the site from local plants several kilometres away. By using on-site plants, Infrastructure Malta is saving over 4,500 truck trips from the roads in the project area, reducing over 22 tonnes of carbon dioxide emissions in nearby localities.

Where possible, the inert construction waste and earth excavated for the foundations of the new structures is not being dumped at waste disposal sites and quarries. Instead, contractors are processing it and reusing it as infill material for the same project.

The two interconnected flyover structures, extending half a kilometre, are introducing an uninterrupted connection between Marsa and Luqa, towards the Airport and the Kirkop Tunnels, to replace the existing route through the Addolorata Cemetery traffic lights junction.

Initially, until the third and fourth flyover structures of this project are opened early next year, this new two-lane connection is being used in the southbound direction, from Aldo Moro Road (Marsa) towards Giuseppe Garibaldi Road (Luqa).

Through this arrangement, the temporary lanes in the Addolorata Cemetery car park area, which served this route until Friday, are no longer required. Infrastructure Malta closed them as soon as the flyovers were opened to free up the required space to complete the construction of other structures of this project. They include the third and fourth flyover structures, which are already under construction beneath the two that Infrastructure Malta inaugurated on Friday. These flyovers will form the final two-lane southbound route between Aldo Moro Road and Garibaldi Road. The first two flyovers will then serve the northbound route, to complete a continuous bi-directional link between these two major roads.

The other flyover structures and new lanes that Infrastructure Malta is building as part of this project will create similar uninterrupted connections between Aldo Moro Road and the other roads merging at the Addolorata traffic lights junction, including Sir Paul Boffa Avenue (towards Corradino and Paola), Santa Lucija Avenue (Addolorata Hill) and Marsa Road (towards Qormi). Works on all of these new connections and other new infrastructure are in progress. Over 35% of the project is ready.

Road users travelling through this junction are encouraged to take note of the yellow direction signs guiding them to the new route up the new flyovers. The 30 kilometres per hour reduced speed limit for safe driving through road works sites continues to apply in all areas of the Marsa Junction Project, including the two new flyover structures.

The Marsa Junction Project includes the development of a new multi-level intersection to replace the Addolorata traffic lights system with 12 kilometres of uninterrupted lanes, grade-separated at three levels, creating direct northbound and southbound connections between the arterial roads merging at this network node. It is eliminating traffic lights waiting times along this principal route to southern Malta, whilst reducing congestion emissions in Marsa and other nearby localities. It also introduces new facilities for alternative modes of travel, such as footpaths and cycle paths, segregated pedestrian crossings, improved bus laybys, bus lanes, a park and ride area, new landscaped areas and other new infrastructure.

The first two phases of the project, including the reconstruction of Aldo Moro Road, Gvern Lokali Road and parts of other nearby roads, were ready in 2018. Last December, Infrastructure Malta started the third phase, focusing on the construction of the flyovers.