Infrastructure Malta completed the excavation of the Santa Lucija Roundabout Underpass, as workers broke through the last stretch of rock separating Tal-Barrani Road from Santa Lucija Avenue, along the main route to southern Malta.

This project includes two new cut-and-cover tunnels beneath the Santa Lucija roundabout, to directly connect the southbound and northbound carriageways of Santa Lucija Avenue (Addolorata Hill) with Tal-Barrani Road. Above this underpass, a new roundabout will facilitate safer and quicker access to the residents of Santa Lucija, Paola and Tarxien. The project also comprises the reconstruction of a nearby jogging track, the upgrading of the Tal-Barrani Road pedestrian subway to be also accessible to cyclists and to persons with disability, as well as a new shared pedestrian and cycling path connecting Santa Lucija to Marsa. 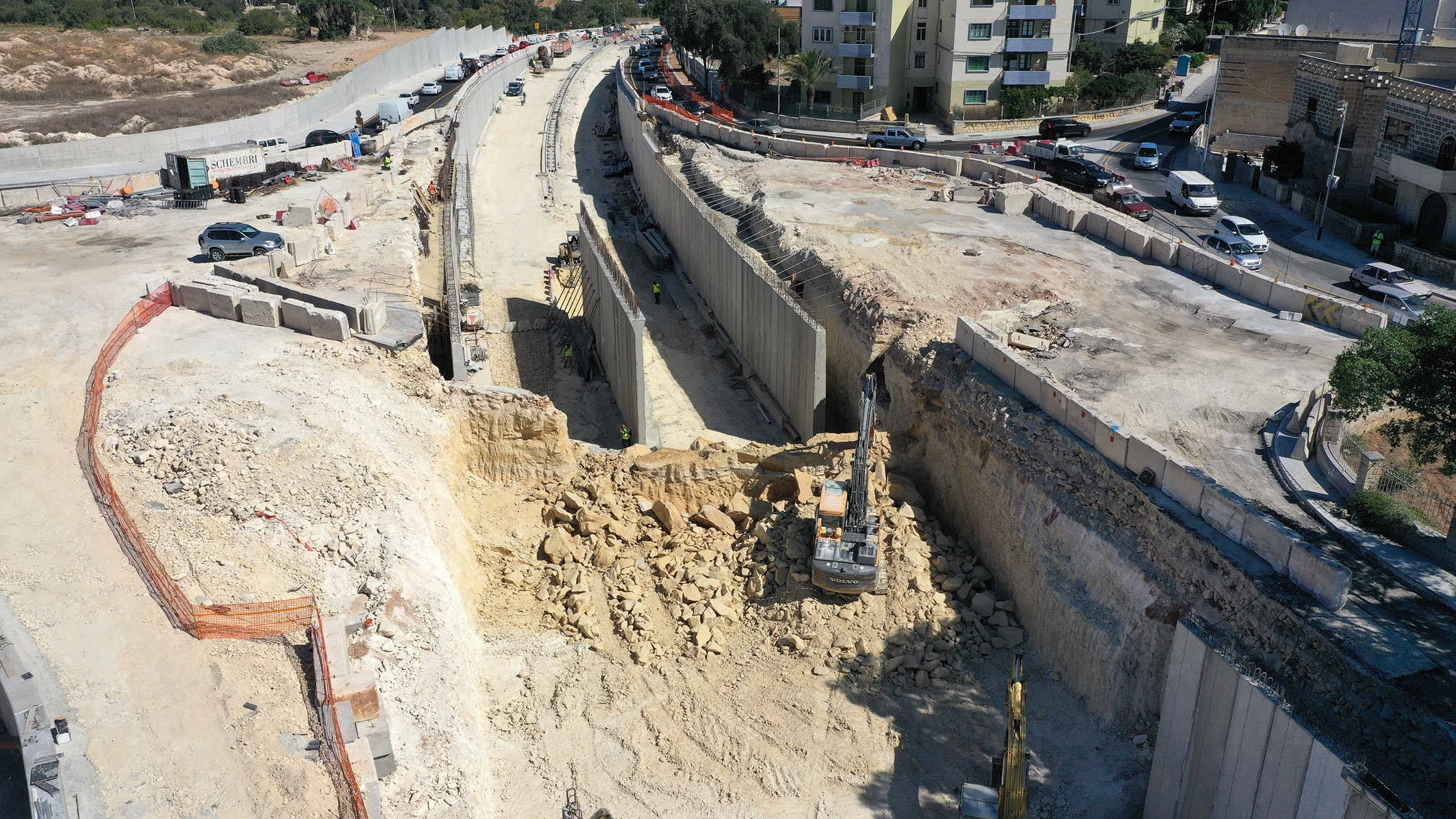 Over 60% of this project is now ready. Despite recent Covid-19 limitations, Infrastructure Malta is planning to complete all remaining works by the end of the year, as originally planned. In recent months, the project contractors cut over 80,000 tonnes of rock to form the new 90-metre underpass. As part of Infrastructure Malta’s efforts to reduce the environmental impact of road construction, where possible, this material is being reused for other works on site, or for other construction and landscaping projects.

Infrastructure Malta is using 398 precast reinforced concrete panels to form the underpass walls, including a central structure separating its two tubes, one in each direction. 299 of these panels are already in place. Now that excavation works are ready, the rest will be secured in their final position in the coming weeks.

Since the project started in July 2019, workers also formed the two 130-metre approach ramps linking Santa Lucija Avenue and Tal-Barrani Road to the underpass. They also built four slip roads leading to the new roundabout above the underpass, to connect this route with the centre of Paola, Tarxien and Santa Lucija. These slip roads are now being used as temporary diversion routes, until the underpass construction is completed. 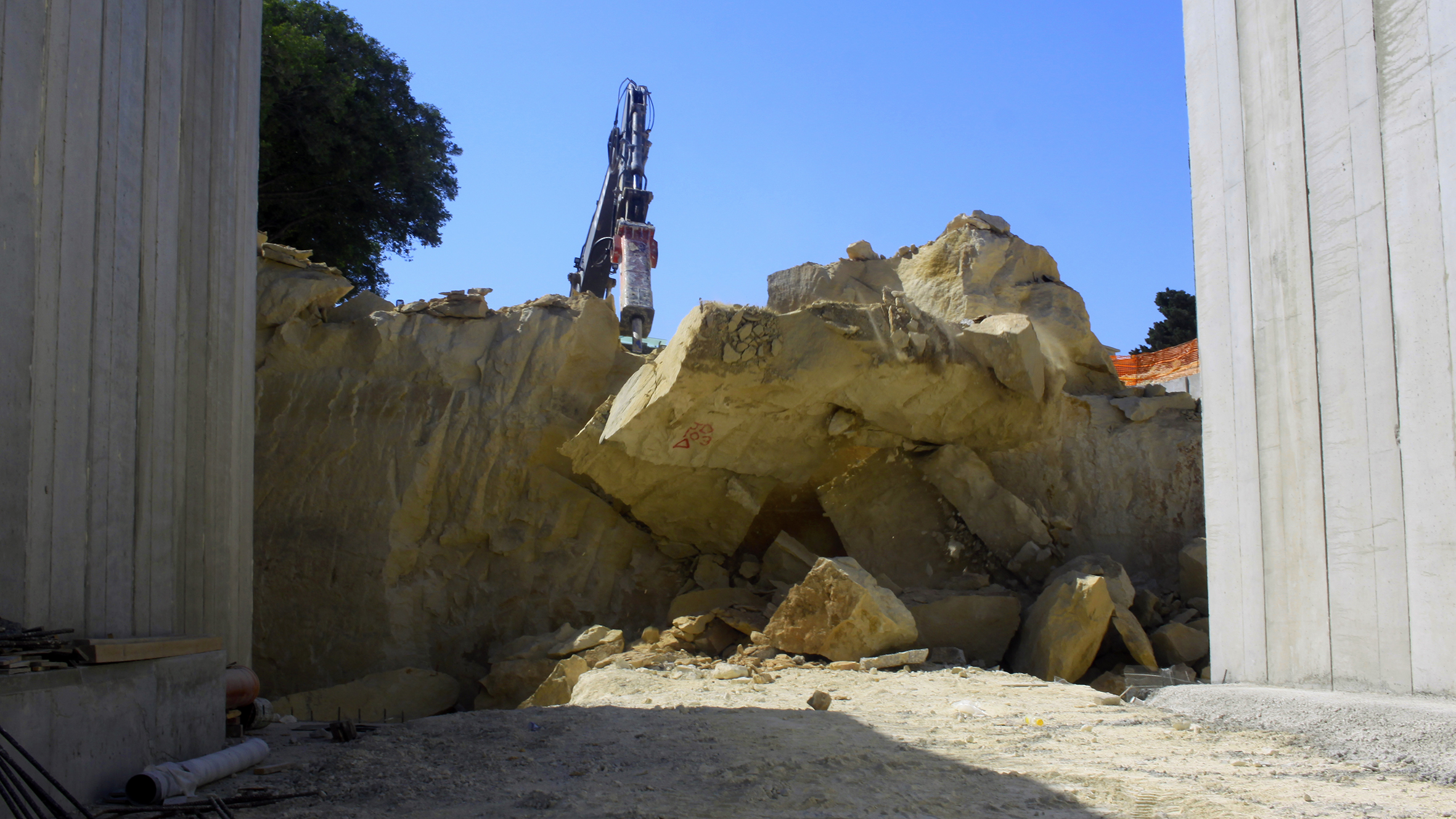 During the last few months, workers also built a 1.1 km walk-through underground culvert, extending from Tal-Barrani Road, along Santa Lucija Avenue, to reach another similar underground tunnel network built beneath the new flyovers of the Marsa Junction Project. These tunnels will accommodate one of the country’s principal 132kV high voltage electricity network connections.

Infrastructure Malta is also replacing a major underground potable water distribution pipeline in the same area. It is laying several kilometres of underground cable ducts for Internet, traffic management ICT systems and other telecommunication networks as well. New reservoirs and 2.7 kilometres of stormwater pipes to store rainwater for the area’s new green areas are also in progress.

The project’s new shared pedestrian and cycling path, almost a kilometre long, will form part of a longer safe cycle route connecting Luqa, Santa Lucija, Tarxien, Paola, Marsa and Qormi. The first stretch of this bi-directional path was developed as part of the reconstruction of Hal Luqa Road, next to Santa Lucija’s Garden of Serenity, in 2019. Through the Santa Lucija tunnels project, Infrastructure Malta will extend it down the northbound carriageway of Santa Lucija Avenue, until it reaches Marsa, where other segregated cycling tracks and a cycling and pedestrian underpass are being developed through the Marsa Junction Project.

The Santa Lucija Roundabout Underpass Project forms part of a long-term investment along the main south-central route of Malta, extending from Pembroke and St Julian’s to Birzebbuga. It includes other arterial road upgrades along this route, such as the 2018 reconstruction of Dicembru 13 Road and the Marsa-Hamrun Bypass, the 2019 reconstruction of part of Regional Road, the Msida Valley Bridge and Hal Luqa Road, the rebuilding of Hal Qormi Road and San Tumas Road earlier this year, as well as the ongoing construction of new connections between the Marsa-Hamrun Bypass and other nearby areas and the seven flyovers of the Marsa Junction Project. This arterial route will continue to be improved with other upcoming projects, such as new tunnels of the Pembroke-St. Julian’s Connections Project, the Msida Creek Project, the Kirkop Tunnels and Airport Intersection Project (KTAIP) in Gudja, and the Luqa Junction Project.