Infrastructure Malta completed the reconstruction of Santa Lucija Avenue, the arterial road between the new Marsa Junction Project flyovers and the new tunnels of the Santa Lucija Roundabout Underpass Project.

The contractors of these two new multi-level intersections rebuilt Santa Lucija Avenue (also known as Addolorata Hill) in an improved design for increased safety to all road users. They also widened it to introduce a bi-directional path for cyclists and pedestrians. This path forms part of a network of footpaths and cycle lanes connecting Paola, Tarxien, Santa Lucija, Luqa and Marsa, which Infrastructure Malta is developing through these two projects and other recent road upgrades. 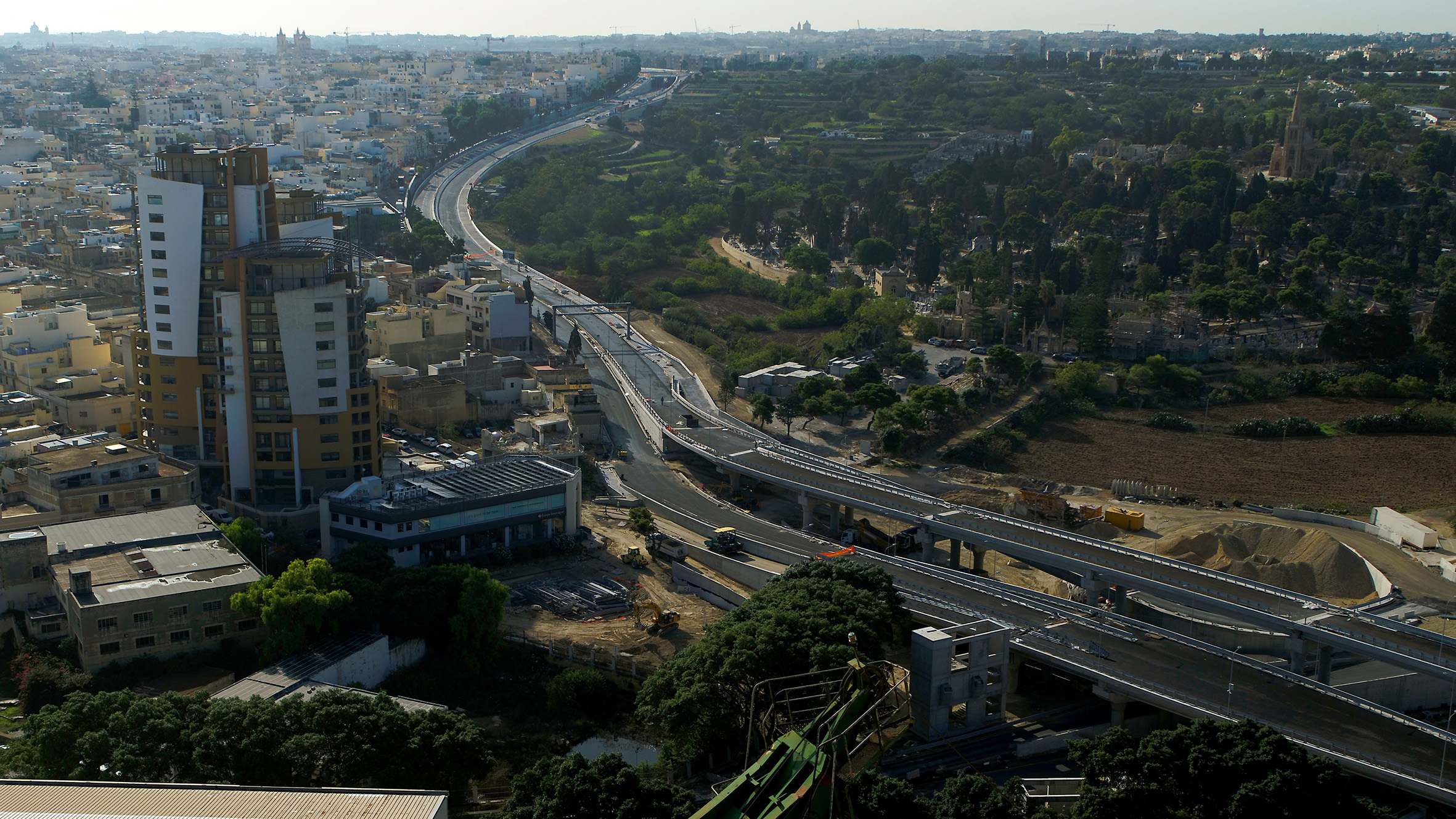 This weekend the agency is reopening the two-lane southbound carriageway of this avenue, extending over one kilometre from Marsa to Santa Lucija. It will reopen the two lanes in the opposite direction in the coming weeks, as soon as it completes the final works on the Marsa Junction Project flyovers.

The northern end of Santa Lucija Avenue is linked to the seven Marsa Junction Project flyover structures leading to and from Aldo Moro Road, Giuseppe Garibaldi Road and other nearby areas in Marsa and Paola.

The reconstruction of Santa Lucija Avenue included the laying of over 3.7 kilometres of underground distribution networks, such as water mains, sewers and Internet cable ducts. Beneath the new path for cyclists and pedestrians, Infrastructure built two underground walk-through culverts accommodating 2.2 kilometres of 132kV high voltage electricity cables and spare capacity for further upgrades. This new underground tunnel network is 4.4 kilometres long, extending beneath other nearby roads all the way from Aldo Moro Road, Marsa to Tal-Barrani Road, in Tarxien. 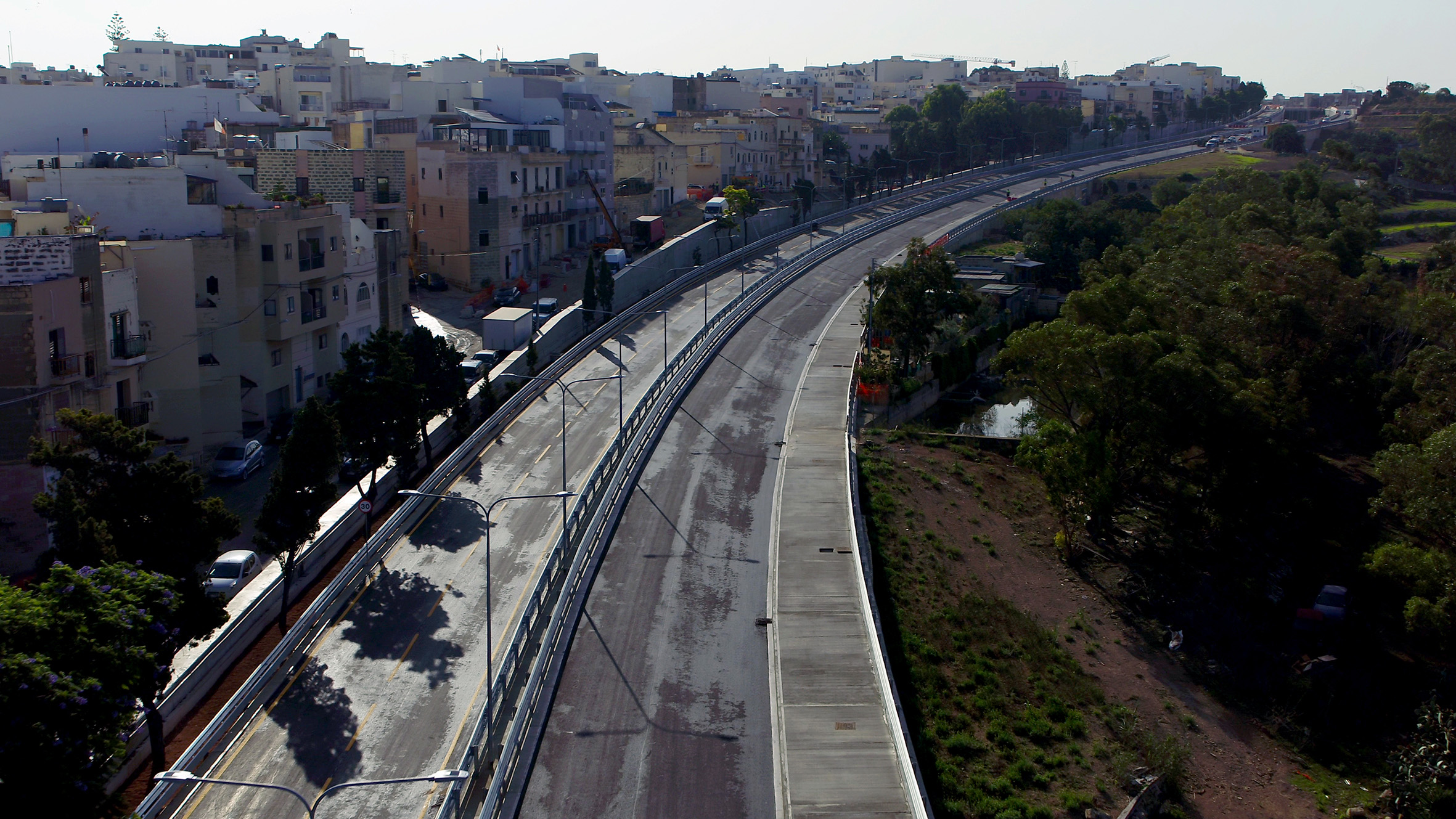 Santa Lucija Avenue also includes a new stormwater system with 105 catchments and a 3.1-kilometre pipeline, channelling rainwater to nearby reservoirs and other related stormwater infrastructure. At night, the road is illuminated by a new lighting system with 110 light poles and over 3.7 kilometres of underground cables. It also has 3.2 kilometres of steel crash barriers for additional safety.

Infrastructure Malta’s contractors compacted over 15,500 tonnes of crushed material to rebuild the foundations of Santa Lucija Avenue. Workers poured another 1,000 tonnes of concrete to form the road’s new track for cyclists and pedestrians, and other footpaths. They then laid 2,800 tonnes of asphalt in the two dual-lane carriageways. For the first time in Malta’s road network, Infrastructure Malta used polymer modified asphalt, a stronger material that lasts longer and is more resistant to temperature variations. The Marsa Junction Project flyovers and the Santa Lucija Roundabout Underpass will also feature this heavy-duty asphalt.

Over 78% of the Marsa Junction Project is ready. The construction of the structures of this project’s seven flyovers are in place. This project is reducing travel times and congestion pollution caused by the traffic lights system that controlled this junction until late last year, when the first three flyovers were opened. The other four flyover structures will be opened next month.

As part of the same project, the agency is also building new footpaths, park and ride areas, cycle lanes, landscaped areas and other facilities to create safer connections for bus passengers, pedestrians and cyclists. These new facilities are scheduled to be ready by the end of the year.

Infrastructure Malta has also completed 70% of the Santa Lucija Roundabout Underpass Project. It includes two cut-and-cover tunnels beneath the Santa Lucija roundabout, to directly connect Santa Lucija Avenue with Tal-Barrani Road. Above this underpass, contractors are rebuilding the old roundabout in a new design that facilitates safer and quicker access to the residents of Santa Lucija, Paola and Tarxien. This project will also be completed by end 2020.