These new tunnels are cutting over 30% of journey times, whilst reducing congestion emissions caused by the previous roundabout junction, which converged several busy routes, including three arterial roads and another three roads leading to Santa Lucija, Paola and Tarxien. The new grade-separated junction is shifting the busiest route of this crossroads, between Tal-Barrani Road and Santa Lucija Avenue (Addolorata Hill), to the new tunnels, facilitating commutes through the other roundabout connections as well. 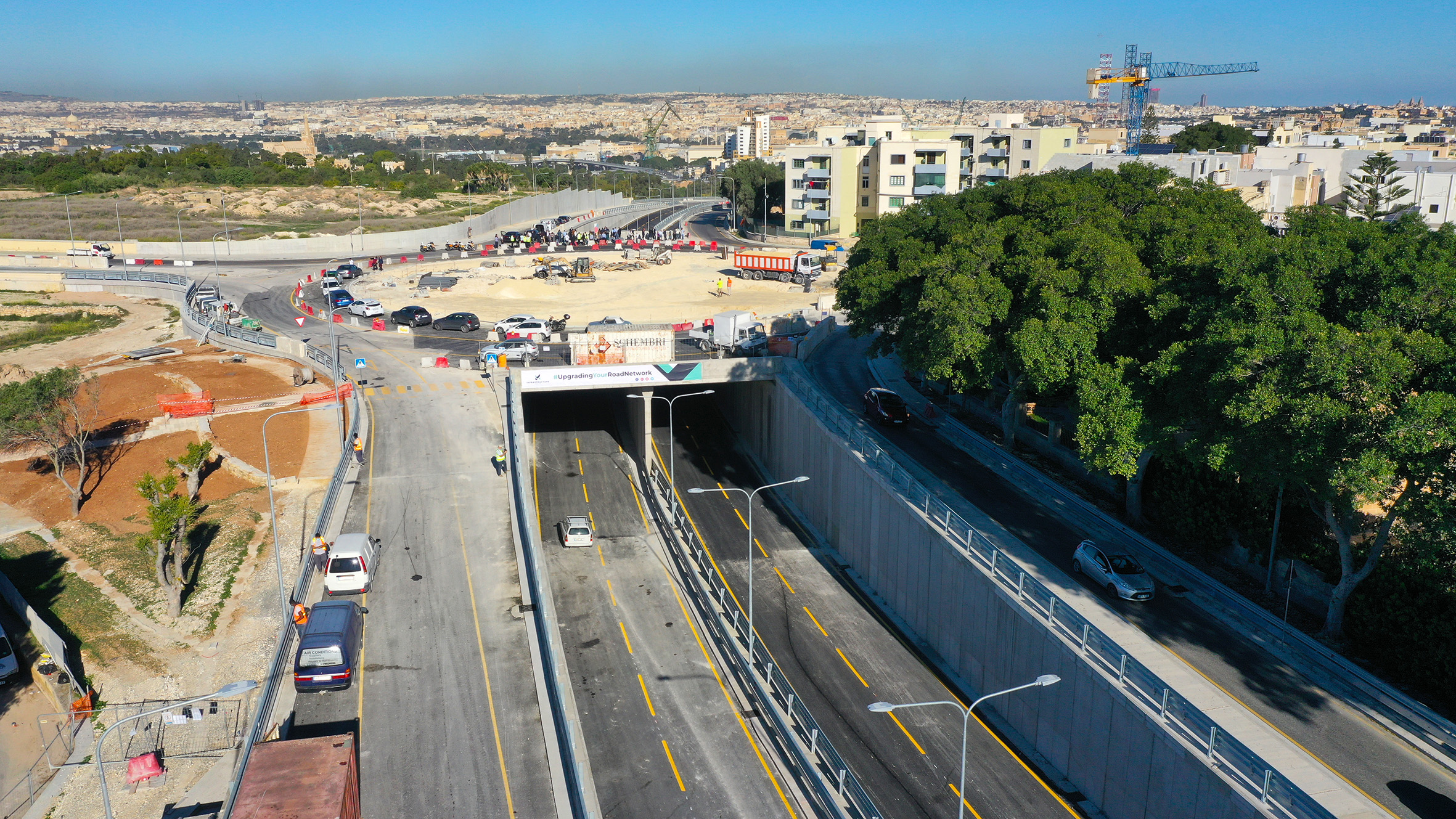 Above the underpass, the agency’s contractors are now rebuilding the roundabout in a safer design, to improve access to residents in Santa Lucija, Paola and Tarxien. The Santa Lucija Roundabout Underpass Project also comprises the reconstruction of a nearby jogging track as well as a new shared pedestrian and cycling path connecting Santa Lucija to Marsa. Infrastructure Malta is also rebuilding the old Tal-Barrani Road pedestrian subway in a safer design for cyclists, with pathways that are accessible to all.

Works on site started in summer 2019, as the project contractors cut over 80,000 tonnes of rock to form the two cut-and-cover tunnels of the new 90-metre underpass. They erected 398 precast reinforced concrete panels to build the underpass walls. Meanwhile, the contractors also formed the two 130-metre approach ramps linking Santa Lucija Avenue and Tal-Barrani Road to the underpass, as well as four slip roads leading to the roundabout above it. 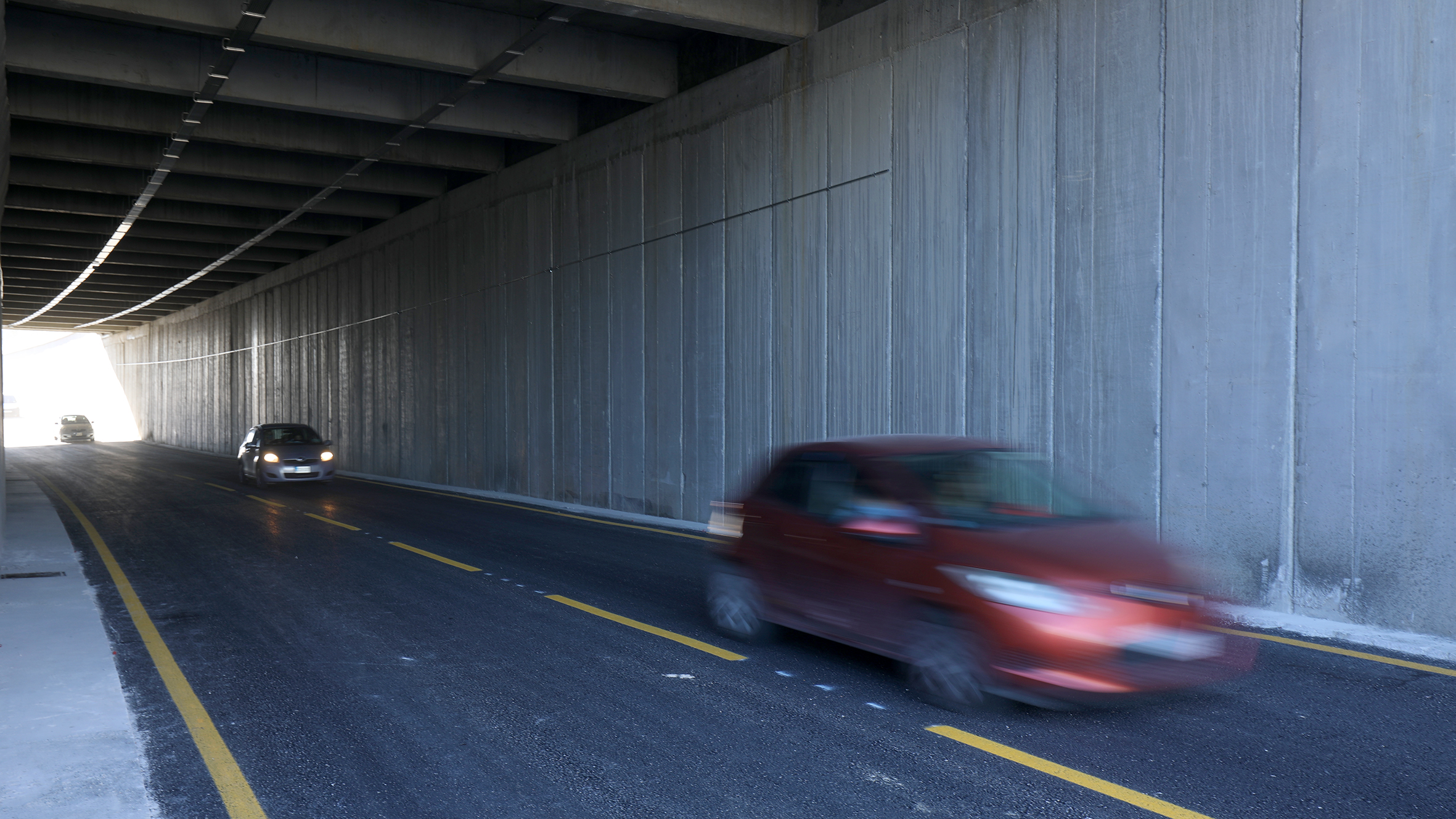 Earlier this month, Infrastructure Malta completed the construction of the tunnels’ roof by pouring tonnes of concrete over a layer of 176 predalles slabs supported by 46 six-tonne reinforced concrete beams. Infrastructure Malta opened the underpass to road users on Friday (23rd October 2020), as soon as the main structures of the tunnel and its approach roads were in place. Final works inside the tunnels will continue during off peak hours or at night, in the coming months.

As part of this project, workers also built a 1.1 km walk-through underground culvert, extending from Tal-Barrani Road, along Santa Lucija Avenue, to reach another similar underground tunnel network beneath the new flyovers of the Marsa Junction Project. These tunnels will accommodate one of the country’s principal 132kV high voltage electricity network connections.

The project’s new shared pedestrian and cycling path, almost a kilometre long, forms part of a longer safe cycle network connecting Luqa, Santa Lucija, Tarxien, Paola, Marsa and Qormi. The first stretch of this bi-directional path was developed as part of the reconstruction of Hal Luqa Road, next to Santa Lucija’s Garden of Serenity, in 2019. Through the Santa Lucija Roundabout Underpass Project, Infrastructure Malta has now extended it down the northbound carriageway of Santa Lucija Avenue, until it reaches Marsa, where other segregated cycling tracks and a cycling and pedestrian underpass are being developed through the Marsa Junction Project.

The Santa Lucija Roundabout Underpass Project forms part of a long-term investment along the main south-central route of Malta, extending from Pembroke and St Julian’s to Birzebbuga. It includes other arterial road upgrades along this route, such as the 2018 reconstruction of Dicembru 13 Road and the Marsa-Hamrun Bypass, the 2019 rebuilding of part of Regional Road, the Msida Valley Bridge and Hal Luqa Road, the rebuilding of Hal Qormi Road and San Tumas Road earlier this year, as well as the seven flyovers of the Marsa Junction Project. This arterial route will continue to be improved with other upcoming projects, such as new tunnels of the Pembroke-St. Julian’s Connections Project, the Msida Creek Project, the Kirkop Tunnels and Airport Intersection Project (KTAIP) in Gudja, and the Luqa Junction Project. 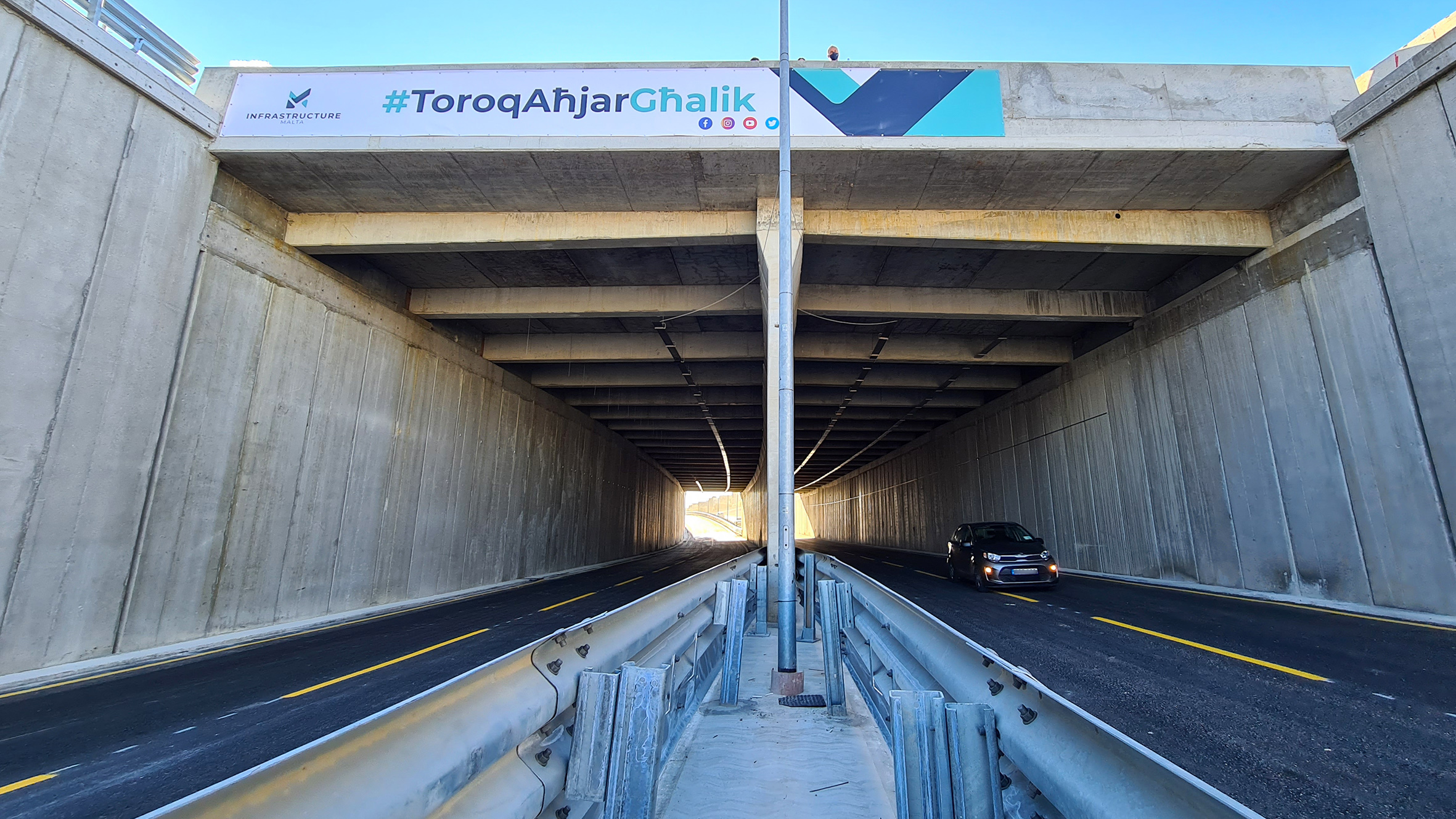