Infrastructure Malta completed a delicate operation to relocate the remains of a Classical Era rock-cut tomb it discovered at the Central Link Project site, in Attard, so that it can become accessible to the public when the ongoing road works are ready.

During this €250,000 operation, the agency’s contractors used specialised equipment to cut the tomb out of the rock surface and shift it to a nearby field, where it will remain permanently displayed by the side of one of the project’s new roads. This procedure, a first for the Maltese Islands, was carried out according to method statements approved by the Superintendence of Cultural Heritage, and under the supervision of the archaeologists monitoring all Central Link Project works. 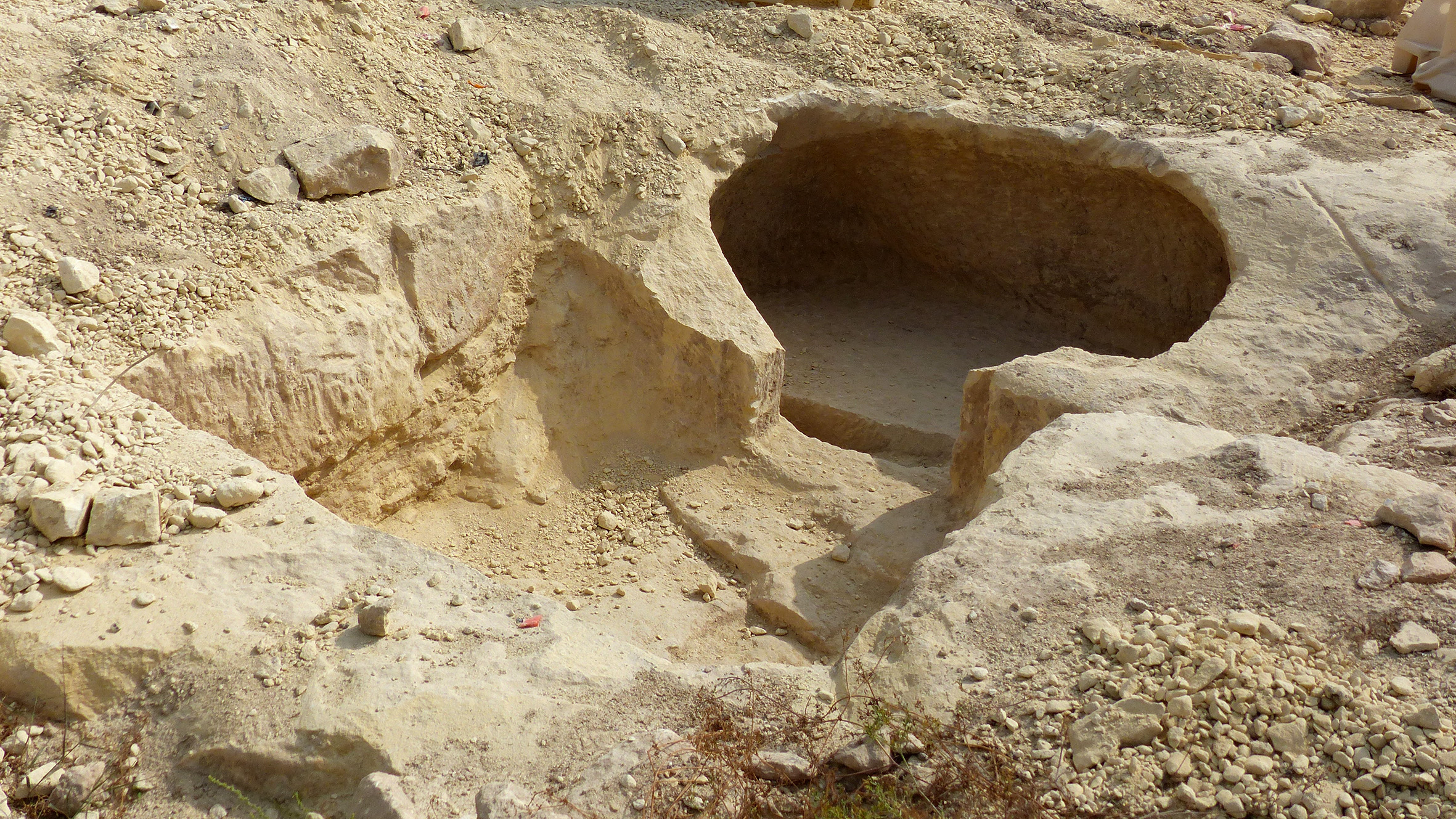 Workers digging for the foundations of the project found the tomb buried under a layer of soil earlier this year. These archaeological remains were not damaged by the road works since Infrastructure Malta is adopting appropriate excavation methods to protect such finds as soon as they are uncovered. In fact, the project contractors are uncovering and cleaning all buried rock surfaces using low vibration equipment and hand tools, instead of heavy machinery. Archaeologists supervise these works and document every find of potential historic significance, so that they can be immediately reported to the Superintendence for further studies.

The complex process to conserve and to relocate the tomb started by covering its surfaces with a geotextile material and filling its cavities with expansion foam and expanded polystyrene (jablo), to reinforce its structure. Using a low percussion mechanical rock saw, workers cut out a hexagonal block of limestone with the tomb inside it. Then, they consolidated it with a reinforced concrete belt and used directional drilling machines and a diamond wire to cut through its base and support it on horizontal steel beams, in preparation for lifting. 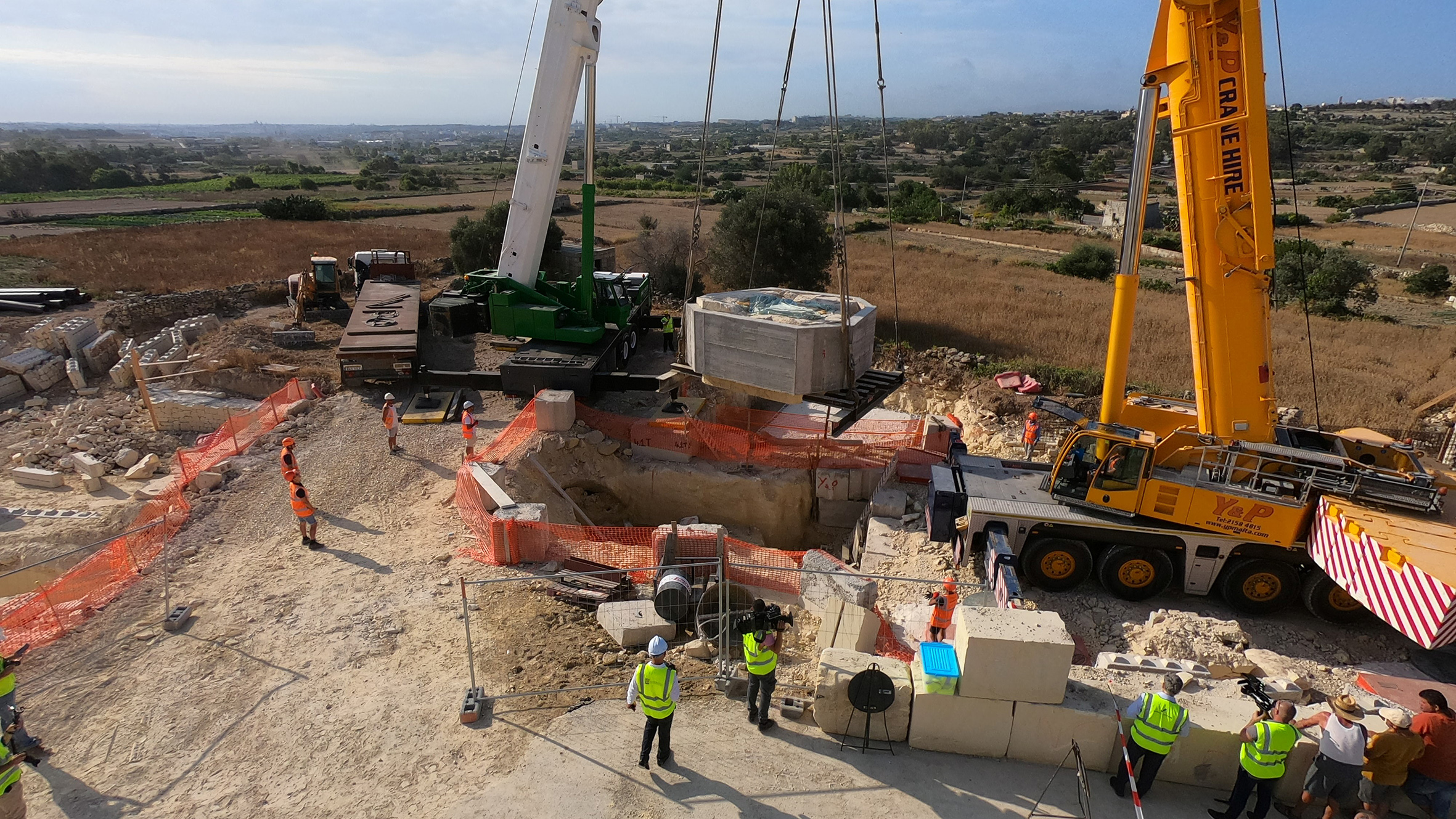 On Wednesday morning, the contractors used two large cranes to slowly lift the limestone block and lay it in its new position a few metres away, as specified by the Superintendence of Cultural Heritage, where it will remain accessible by the side of one of the project’s new roads.

Central Link Project is a multi-million infrastructural investment to rebuild and upgrade the principal arterial route between Mriehel and Ta’ Qali. It includes the construction of new lanes, the elimination of several traffic light junctions and the introduction of new, safer spaces for alternative modes of travel, including ten kilometres of footpaths and the longest segregated cycling track in Malta. The archaeological remains conserved through the operation concluded on Wednesday were found in the area where contractors are currently building two new vehicle lanes, footpaths and part of the segregated cycling track.

Archaeologists approved by the Superintendence are closely monitoring the implementation of this project. When features of interest are uncovered, they set in motion an established procedure to bring them to the attention of the Superintendence and to study them carefully. In the case of discoveries during excavations, this process includes securing the site to carefully uncover them and conduct necessary investigations.

Infrastructure Malta supports the archaeologists by providing the human resources and the equipment to carry out these archaeological excavations and documentation works. At times, this work may require laborious cleaning and brushing of rock surfaces with hand tools. Once this stage of the process is completed and all required data is compiled, the Superintendence guides Infrastructure Malta on any additional requirements, which may necessitate modification of approved project plans to safeguard findings that warrant protection. As happened in the case of the tomb in Attard, the Superintendence can also request that structures or other features of historic importance are relocated to other nearby sites, so that they can be conserved.

Archaeological discoveries during such projects do not happen by accident. The supervision of excavation and other civil works is one of several measures that the Superintendence requests from Infrastructure Malta and any other developer intending to carry out works that may somehow impact known cultural heritage or uncover new remains that can enrich the understanding of Malta’s past.

It is in fact thanks to the adoption of these protective measures, through the work of the on-site archaeologists and through the ongoing collaboration between the two entities in infrastructural projects that many new features of potential archaeological importance are uncovered, analysed, documented and where necessary, protected for future generations.