The cantilevered walkway of the new Gheriexem Belvedere, in Rabat, will start taking shape this month, as Infrastructure Malta nears the halfway mark of this €4 million project to rebuild Gheriexem Road and stop decades of subsidence damage to its structure and nearby buildings.

The Gheriexem Belvedere Project includes the reconstruction of the scenic Gheriexem Road on stronger foundations, in an improved alignment incorporating a new belvedere with safer footpaths, benches overlooking the Gheriexem Valley and landscaped areas with many new trees.

This week, Infrastructure Malta is entering a new phase of this project, as workers start putting together the rebar and formwork to cast in-situ the slab of the cantilevered belvedere’s deck. 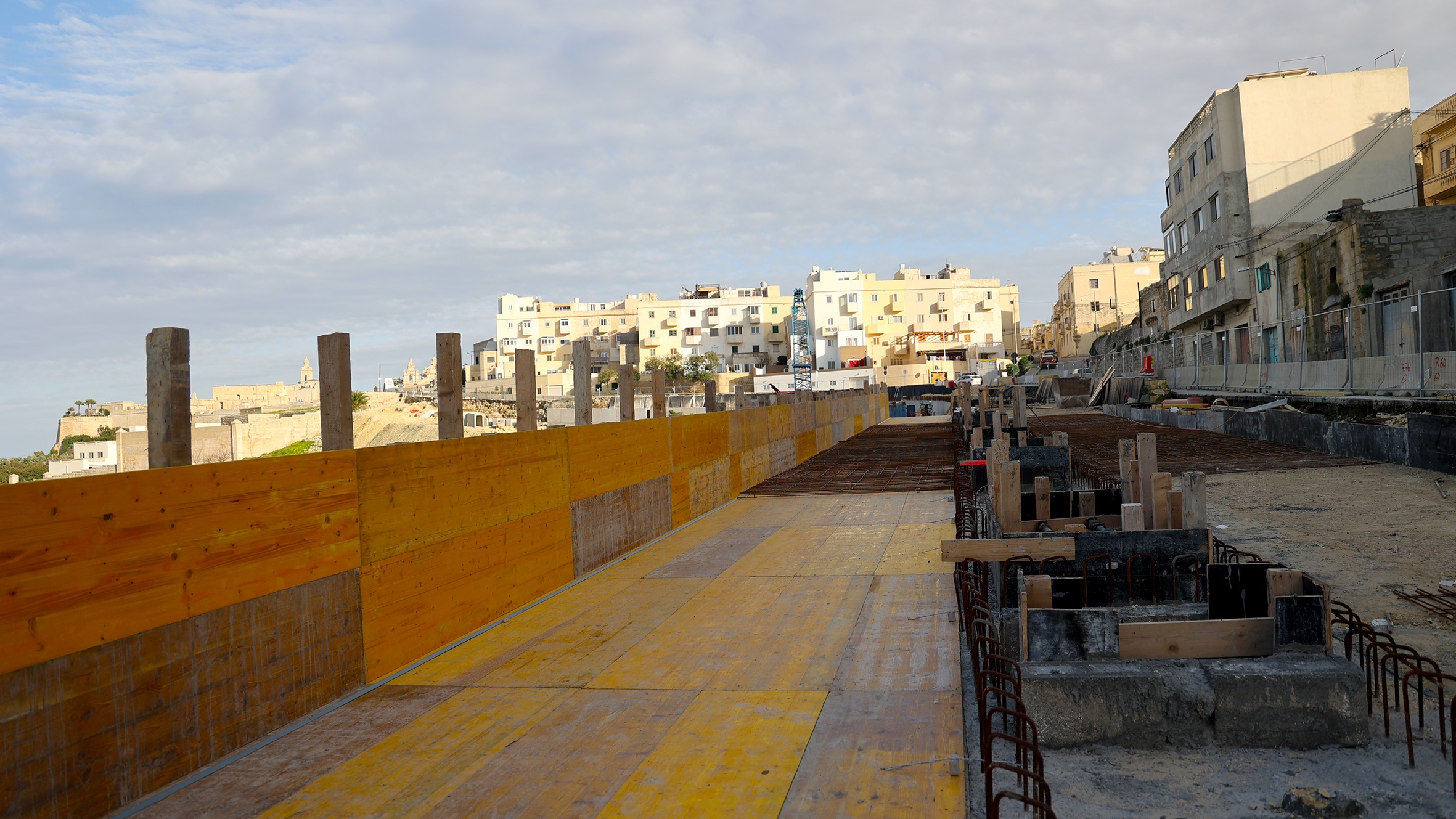 In the meantime, to consolidate the benefits of this project and to alleviate long-standing flooding difficulties in this area, Infrastructure Malta is now also reinforcing part of the underground stormwater catchment system between Il-Haddiem Avenue, Tat-Tabija Road, Gheriexem Road and Ghajn Qajjet Road (Mtarfa Bypass). Through this separate upgrade, the agency is laying a half-kilometre stretch of new pipeline, one-metre wide, instead of an older narrower culvert. It is also improving the efficiency of some of the existing catchments. This reinforcement will complement the new stormwater system forming part of the Gheriexem Belvedere Project, to channel rainwater from several streets to nearby natural valleys and watercourses.

During the last few months, the project contractors completed most of the new foundation structure of this 800-metre road, except in three small sections where Infrastructure Malta introduced minor changes after buried remains of potential historical significance were uncovered during archaeological excavations forming part of the same project. The Superintendence of Cultural Heritage and Infrastructure Malta modified the foundation structure’s plans to keep these remains visible and accessible for future studies.

To build the new footings of the road and its new belvedere, Infrastructure Malta inserted over 100 steel-reinforced concrete piles 15 metres (5 storeys) deep into the ground. Each pile ranges between 0.7 and one metre wide. The project contractors bridged the piles with a long concrete capping beam. On top of this platform, workers placed some 6,000 large limestone blocks and poured tonnes of concrete to form a seven-metre thick retaining wall abutting the weak rubble wall built on clay which supported the existing road until it started to gradually give way in recent years. 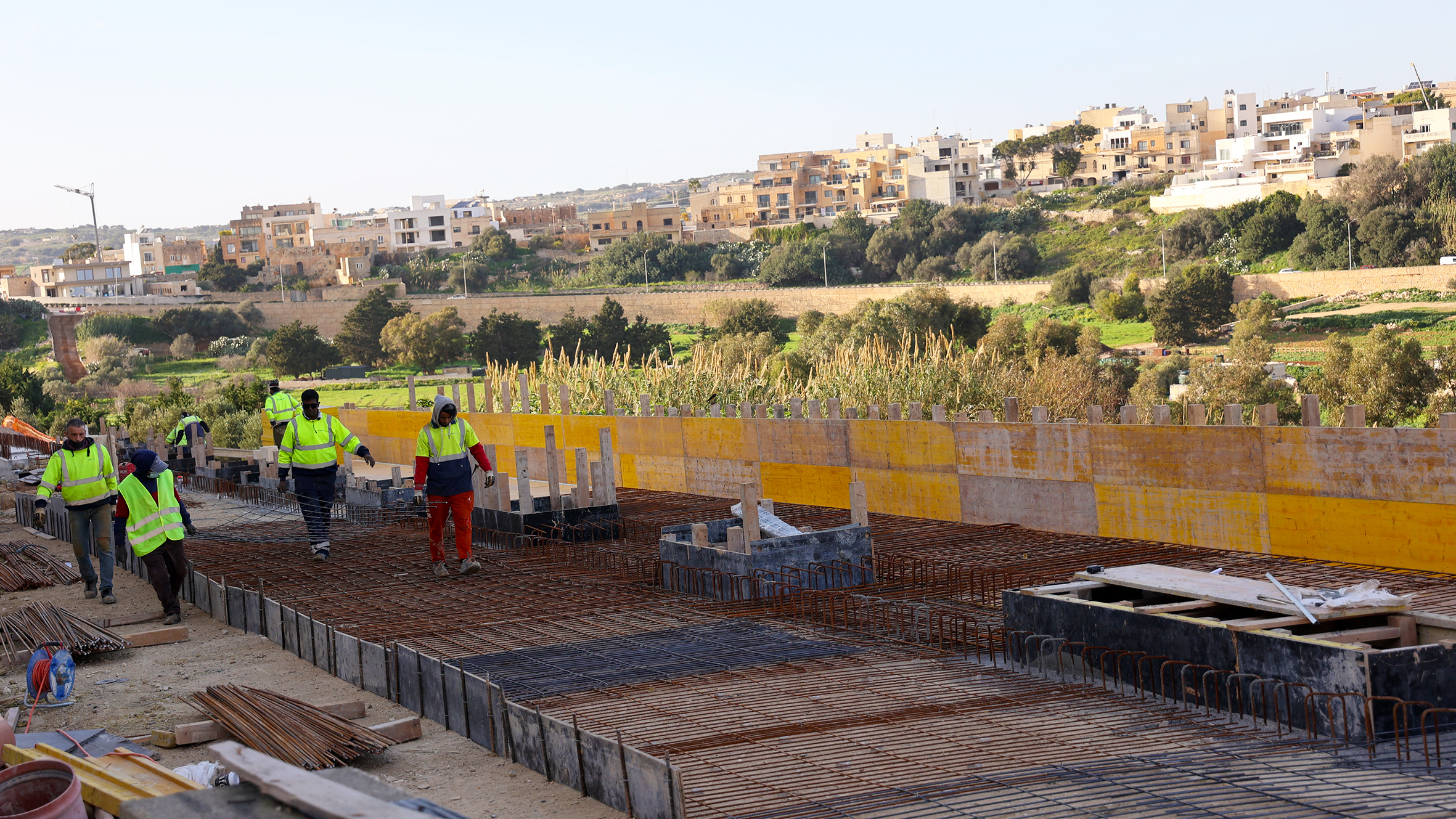 Within the new retaining structure, the agency also formed a walk-through culvert for new high voltage electricity cables that will improve the area’s electricity grid. It used 260 precast U-shaped elements to form this 600-metre tunnel. These electricity cable walk-through culverts will reduce the risk of having to dig up the new road for future repairs or upgrades. The project also includes a new sewer, new stormwater catchments as well as potable water pipelines and ducts for improved internet and other telecommunication networks in this area of Rabat.

The Gheriexem Belvedere Project was launched in July 2020 with extensive archaeological excavations in the strip of land along the road’s existing retaining wall, where the new belvedere is now under construction. Before starting these works, the project contractors also cleaned the site from decades of illegally dumped waste.

The plans of this project were prepared by the Ministry for Transport, Infrastructure and Capital Projects’ Works and Infrastructure Department. It designed the structure of the new foundations and the belvedere in consultation with environmental and archaeological authorities to minimise adverse impacts on adjacent fields.

For many years, residents in this area have been calling on the authorities to stop the gradual sinking of this road along the side of Gheriexem Valley, which is causing extensive damages to their residences, some of which are in danger of collapsing. Geotechnical investigations on site confirmed that this 800-metre road was built on layers of weak, fractured rock and clay. Its old retaining wall is cracked and irregularly distorted, showing that it is being pushed outwards by the movement of the unstable infill materials beneath the road.

Infrastructure Malta is working to complete this project as soon as possible, to ensure the safety of road users and the area’s residents.