Infrastructure Malta is planning to open the next four of the Marsa Junction Project’s seven flyover structures and to eliminate the last remaining traffic lights at this intersection by end March 2020.

After opening the first two flyover structures a few weeks ago, the agency’s contractors continued works on the other five flyovers being developed through this €70 million EU-funded investment. On Friday evening (18th October), Infrastructure Malta is closing part of the northbound carriageway of Santa Lucija Avenue, in front of the Addolorata Cemetery parking area. For the next few months, one of the two lanes of the southbound carriageway of this part of the road will be used as a northbound diversion lane for road users travelling down the hill from Santa Lucija towards Aldo Moro Road.

Infrastructure Malta advises road users travelling from Santa Lucija Avenue (Addolorata Hill) to Aldo Moro Road and vice versa, to allow for more time to get through this diversion. When travelling southbound from Aldo Moro Road towards Santa Lucija and Tal-Barrani Road, commuters can also use the alternative route through the two flyovers opened last month, Garibaldi Road and the recently reconstructed Luqa Road (next to the Chinese Garden of Serenity).

The agency reiterates the importance of adhering to the 30 kilometres per hour reduced speed limit for safe driving through road works sites, which applies in all areas of the Marsa Junction Project and its approach roads.

Instead of the closed lanes of Santa Lucija Avenue, during the next few months Infrastructure Malta will build the remaining columns and abutment ramps of another two flyover structures. Weather permitting, these flyovers will be opened to road users several months ahead of schedule, by end January 2020.

After opening these two flyovers, Infrastructure Malta will be able to dismantle the Addolorata Cemetery traffic lights once and for all, drastically cutting journey times for over 100,000 road users who use this intersection every day.

The project contractors started lifting and setting the concrete of one of these flyover structures on Thursday morning. They will use 65 prestressed concrete beams to bridge the 227-metre span (length of two football grounds) from Santa Lucija Avenue to the highest point of the first two flyover structures, completed last month. This distance will make the flyover structure the longest overpass connection of its kind in Malta.

Another two flyovers of this project will be opened to road users by end March. They will connect the southbound carriageway of Aldo Moro Road (Marsa) to Giuseppe Garibaldi Road, towards Luqa, the Kirkop Tunnels and the Airport. This route is temporarily being served by the first two flyovers opened last month, which will be ultimately used as a northbound direct link between these two roads. 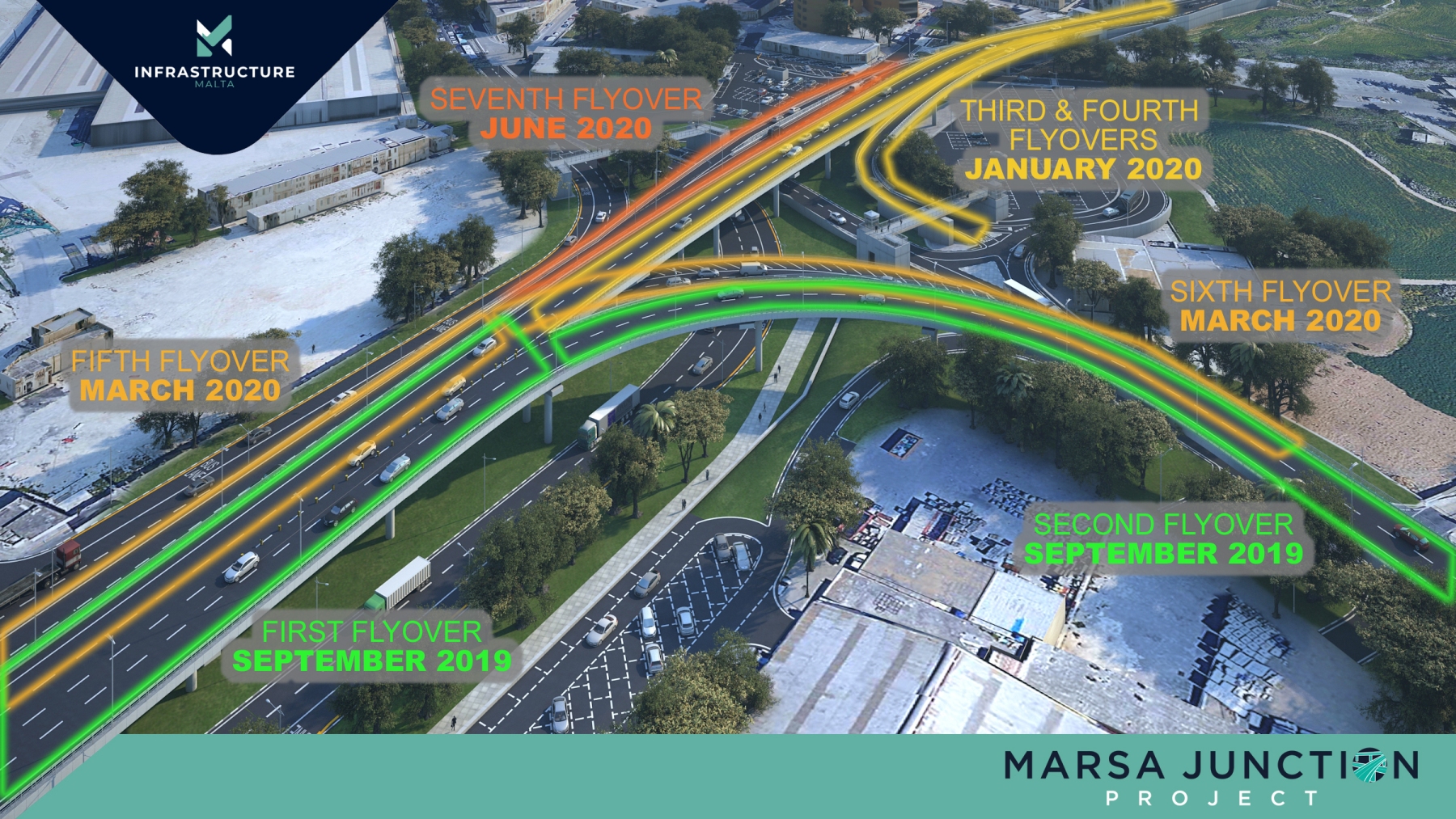 The agency’s contractors cast the foundations and the concrete pillars of these new Garibaldi Road flyover structures last summer. The curved steel beams of one of them are now in place and workers are laying its two-lane deck slab on top of them. Their ramps and abutments will be completed in the beginning of 2020 as well.

The Marsa Junction Project includes the development of a new multi-level intersection to replace the Addolorata traffic lights system with 12 kilometres of uninterrupted lanes, grade-separated at three levels, creating direct northbound and southbound connections between the arterial roads merging at this network node. It is ending traffic lights waiting times along this principal route to southern Malta, whilst reducing congestion emissions in Marsa and other nearby localities. It also introduces new facilities for alternative modes of travel, such as footpaths and cycle paths, segregated pedestrian crossings, improved bus laybys, bus lanes, a park and ride area, new landscaped areas and other new infrastructure.

This investment is co-financed through the EU’s Cohesion Fund and Connecting Europe Facility.