Infrastructure Malta is launching the final phases of a €2.25 million project to improve the connections of the Marsa-Hamrun Bypass with nearby localities, including Birkirkara, Santa Venera, Hal Qormi, Hamrun and Marsa.

The construction of the new connections is almost ready. However, in recent months, the agency widened the scope of this project to rebuild and reinforce parts of the old wing wall structures of this road’s flyover and sections of the retaining wall of the Santa Venera Tunnels’ southbound exit ramp, in the same area. These structures were built decades ago and needed extensive repairs and reinforcements to avoid the risk of collapse or other public safety risks. Infrastructure Malta is rebuilding over 750 meters of retaining walls and wing walls through this additional €600,000 investment.

The Marsa-Hamrun Bypass brings together several arterial routes of the European Union’s Trans-European Transport Network (TEN-T) in Malta. The ongoing project to improve its connections with nearby localities will augment the benefits of another €5 million investment to reconstruct and widen this road in 2018. 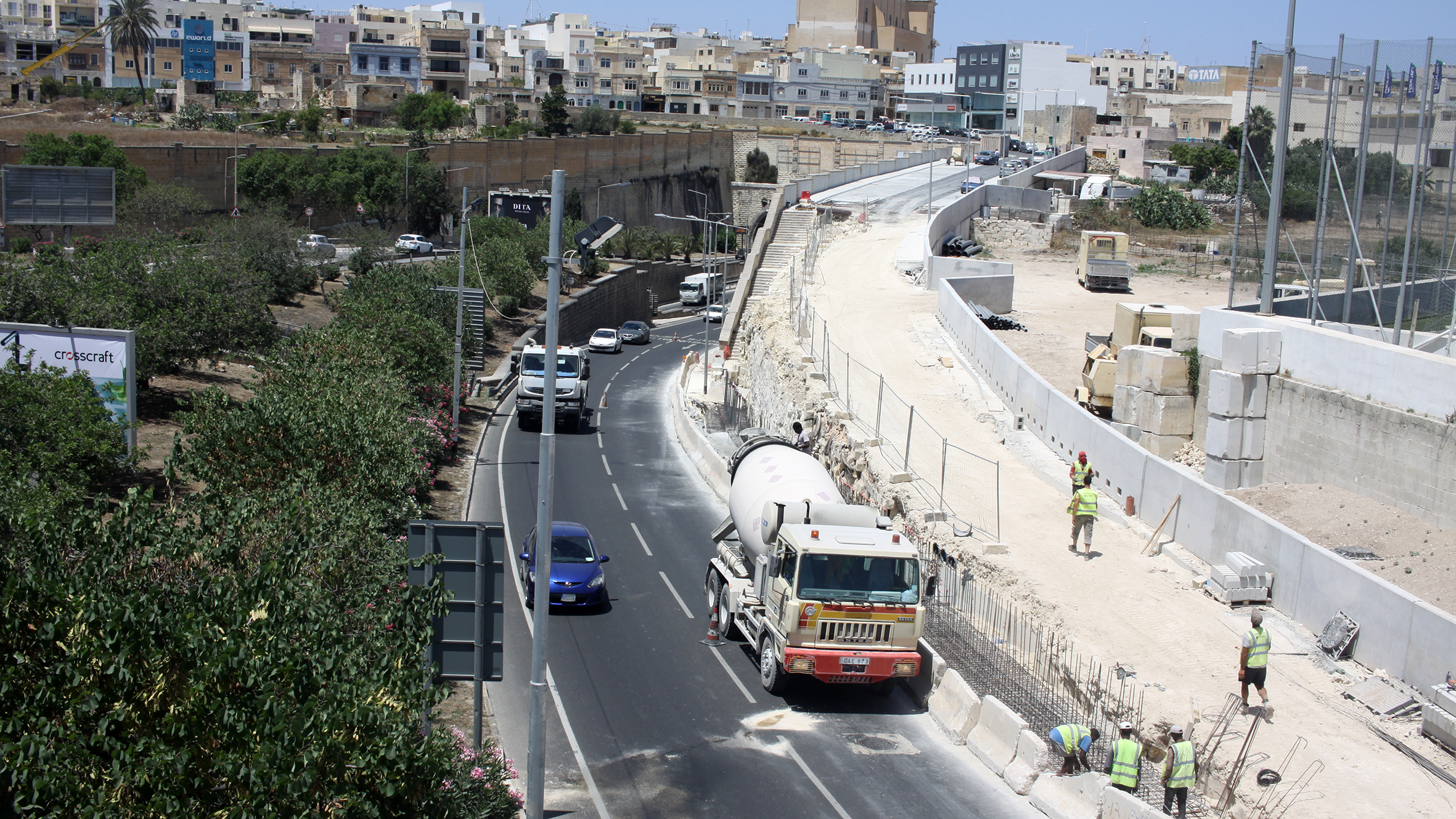 The new connections include a slip road and an exit ramp to create a more efficient alternative to existing routes through narrower streets in the same area, shifting through traffic from residential zones to the arterial road network. In this way, the project will cut journey times for many commuters whilst reducing accident risks and improving air quality in nearby residential areas.

Workers are rebuilding and extending an existing, disused road next to the Bypass to connect Il-Kanun Road, in Santa Venera, with the southbound carriageway of the Marsa-Hamrun Bypass. This slip road will introduce a quicker connection from Qormi, Birkirkara, Hamrun, and Santa Venera towards Valletta and the south of Malta. It will also provide an alternative to the existing route through the roundabout beneath the Mriehel Bypass flyover, in Qormi. As part of the construction of this new connection, workers are currently also rebuilding sections of the 10-metre high retaining walls separating this road from the Santa Venera Tunnels exit ramp located next to it, at a lower level.

The other part of this project includes the addition of a second lane along the off-slip connecting the Marsa-Hamrun Bypass to the Hal Qormi Road roundabout and flyover junction, facilitating access to Hal Qormi Road, towards Qormi, and to the centre of Hamrun. Infrastructure Malta completed the construction of this new lane earlier this year. It is now open to road users instead of the pre-existing lane, which is temporarily closed for the rebuilding of the flyover wing wall. As this work nears completion, the agency’s contractors are working to rebuild and open the closed lane soon.

To link the two new connections, Infrastructure Malta is also opening a fourth southbound lane along the Marsa-Hamrun Bypass. This lane was built when the road was reconstructed in 2018, in preparation for the new links that Infrastructure Malta is currently developing. This project will add over 600 metres of lanes to the existing network, as well as new footpaths for safer pedestrian access.

Earlier this year, as part of this project, the agency’s contractors also extended a walk-through cables culvert that was built as part of the road’s reconstruction in 2018. This tunnel houses high voltage cables forming part of the national electricity grid. By placing cables in such culverts instead of burying them beneath the asphalt surface, any repairs or maintenance works to the electricity cables within can be carried out without the need to dig up the road. Workers are also laying new underground cable ducts to reinforce the networks providing Internet and other telecommunication services in the area, as well as new stormwater pipelines and catchments, to reduce flooding risks.

Infrastructure Malta is working to open the new Marsa-Hamrun Bypass connections later this summer. All project works, including the rebuilding of the retaining walls and wing walls, will be ready by the end of the year.